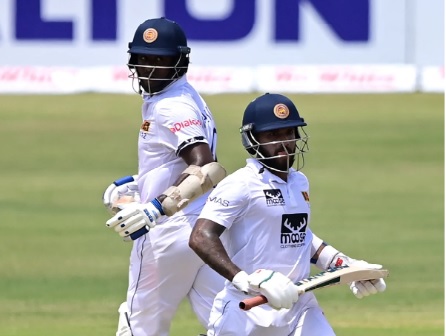 Former captain Angelo Mathews reeled back the pages of time to his hey day century making bravado striking a stellar unbeaten 114 to lift Sri Lanka from a shaky 2 for 66 to 258 for 4 wickets by the close on the opening day of the first test match against Bangladesh at the Zahur Ahamed Chowdhury Stadium in Chattogaram yesterday.

Rekindling the form reminiscent of his hurrah early days when he struck a historic unbeaten match winning 160 against England at Headingly, Mathews ended a long form drought to bring up his 12th test century. Bordering on the mercurial of overriding a tricky situation on a hot humid day after Sri Lanka had llost skipper Dimuth Karunaratne cheaply for 9 with the score on 23 and Oshada Fernando for 36, the 34-year old veteran batsman made the most of the situation to come back to his own from a rock bottom recent past that had put him on the line. He struck 11 boundaries and a six in an innings exemplified by crisp on driving and leg side shot making. He had one life on 65 when he was dropped by Mohmudul Hasan Joy off Taijul.

Mathews found an able ally in Kusal Mendis who made a solid 54 in fronting a 92-run third-wicket partnership in lifting the side, and went on to add a further 75 for the fourth wicket with Dinesh Chandimal who was unbeaten on 34 at stumps. Mendis’ was a compact stonewalling knock off 131 deliveries with just the three boundaries as he lent great support to Mathews to carry on the shot making.