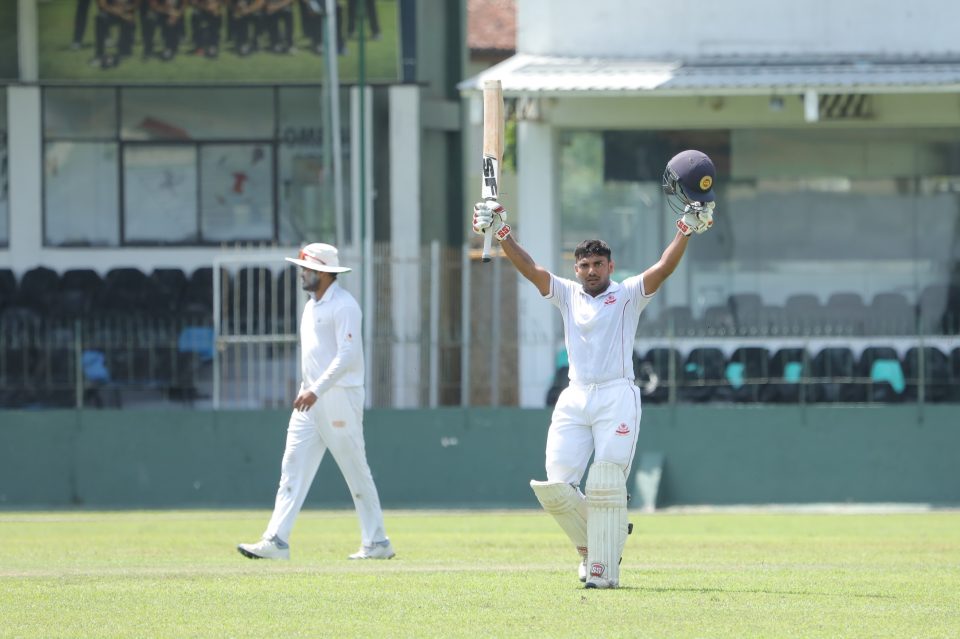 Lasith Abeyratne was a rich pay off playing a major role with the bat as a No.5 middle order batsman in CCC clinching the Sri Lanka Cricket Major League Tier ‘A’ Champioship Super Eight title this year. The 27-year old right hander notched three centuries in a 788-run harvest from six innings in four outings proving to be an ace act trump card in guiding his side to that trophy glitter.

In the high riding top domestic event where competition to catch the national selectors is prime where in particular it is the platform for the hitherto unknown latent talent edging to be counted, indeed Abeyratne’s consistent run getting act was a noteworthy feature in the concluded championship. He had a highest score of 153 while featuring in a 173-run stellar partnership act together with Kusal Mendis when the chips were down. That was in the crunch contest against the NCC where thanks to the combinative brilliance of Lasith Abeyratne CCC totaled 480 in overhauling their opponents in a crucial must win match for first innings points. His contribution was 104.

In an 8-year run in top flight domestic cricket Lasith Abeyratne has performed creditably with a modest run aggregate of 600 runs per season. In 2018 he made 620 runs and 560 in 2018. His run vein this season put him fourth among the best top scorers after Lahiru Udara Igagalgamage, Dinesh Chandimal and Bhanuka Rajapaksa who dominated the run making top bracket.

A product of D.S. Senanayake College, Lasith Abeyratne hailing from Mawanella shone at U13 junior level and U15,17 and 19 for his alma mater while going on to captain the First Eleven in 2012. The wicket-keeper batsman’s talent found him recognition when he was voted the Sunday Observer runner-up was his wicket-keeping efforts. He went on to make the grade at national level when he was picked to the Sri Lanka U19 XI in 2011-12, and quickly impressed scoring 96 and 30 against the touring England U19 XI in 2011. He also represented the SL U19 XI in a 4-nation tournament in Hyderabad.

Lasith Abeyratne credits his uncle Lakshman Harischandra with having been his mentor in backing him in his cricket career.

SLC warned the player who was involved in a brawl